Being an evangelist, Zeral Brown was never content to only preach in his church.  His burden was for the unsaved wherever.  For this reason he began to evangelize the small towns and country areas around the town of Hato Mayor.  Since his transportation was a 1935 Ford passenger car, he maximized its use by installing a record player (no computers in that era) under the dash on the passenger side along with two large bell type speakers on the roof of the car, and fastened a microphone to the amplifier.. He then installed a small generator on the back bumper.

He would park along side of the crossroads when he found a few houses with people around.  He first began to play hymns with as much volume as possible to attract the attention of the residents and with the mic, called them together.  When he had their attention he would preach the Word.

One day as he arrived at the place called Kilometer 23, a woman he had met in Hato Mayor came to him with a special request.  Her mother lived with her farther on in a place a mile or so away up on the hill top/  No roads led to this place but Zeral soon found someone to shoulder his portable organ and off they went up the hillside.

Upon arriving the lady took him to a small shack behind her house which was no bigger than a small pigpen and not high enough in which to stand up.  There he was introduced to the mother who was totally blind seated on the dirt floor.  Dona Nena had come to know Jesús as her Savior in the town of Hato Mayor and wanted her mother to know Him too.   With his Bible open Zeral led this blind lady to Christ.

Years later after beginning a new church plant in the capital city, Santo Domingo (then Trujillo city) Zeral met Dona Nena and her mother on the street and took her picture.  .  He was assured that both these ladies had remained faithful to their testimony and were living for our Lord and Savior.

How we started a New Church Plant in an unevngelized town in a foreign country.

1947 – After living in El Seibo, Dominican Republic for one year studying the language and getting acquainted, Zeral and Dorretta Brown felt led to begin our own work in a village that had no evangelical church. Zeral felt he had enough language to be able to move out on our own.  Upon visiting the village of Hato Mayor del Rey, a town about 24 kilometers from El Seibo we began to look for a house to rent that could also be used to begin a church.

After much searching we met a friendly man and ask him if he knew of such a place.  The man led us to a small for-rent house and after looking it over Zeral went home to pray about it.  A few weeks later he returned with the intent of renting the building when he discovered this kind man had rented the building for himself with the intention of also starting a church.

The search continued and soon he found a large empty house on a more principle street situated on a corner with a large yard in back  This wooden building was completely square with nine large rooms divided on the inside much as you would a tic tac toe design.  The corner room was perfect in which to begin services.  He moved his family to Hato Mayor in the month of May 1948.

Now began the process of fitting the room with furniture.  We had little money, only a 1935 Ford car and all lumber and supplies had to be brought from the capital, Santo Domingo (then Ciudad Trujillo) three hours drive on wash-board like gravel roads.  So we began to pray!  Soon a letter arrived with a check for $5.00.  Zeral quickly planned a trip to the city and was able to bring back enough lumber, nails, sandpaper, varnish and brushes to finish one complete bench or pew. He tied the lumber to the outside of the car and brought it home.  Immediately he went to work to design this bench and construct it.

Again we prayed and again God sent the money.  This time it was a check for $10.00 which was enough for two benches.  As I remember this room held only five benches, leaving just enough room in front for a small platform.  A railing was needed around the front of the platform and a curtain to enclose the doorway behind the platform.  A friend in Oregon sent enough drapery fabric to complete this project.

What to do about music?  Again we asked God to supply.  Two school teachers whom we met in Indiana sent us a portable organ!  A pulpit?  Zeral took the wooden crate in which the organ was crated, turned the crate inside out, sanded, painted and made a holder for his Bible on top and it was perfect.

On November 29, 1948 we set the date for the opening service.  The city closed off the side street to traffic (one or two cars that might happen by).  The benches were set out into the street.  A borrowed flat-bed truck was used for the platform.  In order to prevent any planned intervention from the ruling church in town we waited until that afternoon, mounted our large bell speakers on the top of the car, made up flyers to pass out and drove around town announcing the evening inauguration service..

And the people came!  Three missionary couples also came to help with special music, the preaching and crowd control.  At the invitation tour young men made their way into the living room to receive Christ as their Savior! Thus began a new church plant.  This church is still in existence and has proved to be the birth place of a good many of the gospel preaching pastors in the Island of Dominican Republic. 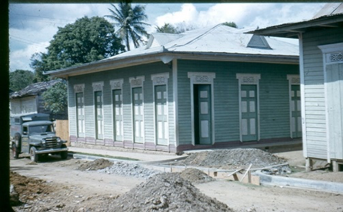 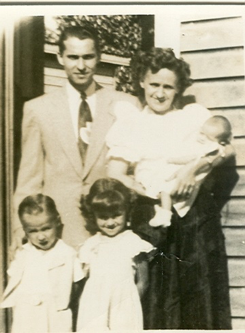 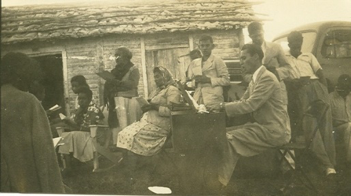 The very first convert in the ministry of Zeral and Dorretta Brown as a missionary in the town of Hato Mayor in the Dominican Republic was a young man by the name of Alejandro Mota.  Zeral’s philosophy was to preach the Gospel, bring individuals to a saving knowledge of Jesús as their Lord and Savior, teach them the Word and send them out to reach their own people.  Mathew 28:19,20.

Just as soon as was feasible Zeral and Dorretta began a Bible School for Alejandro and a few other converts.  Since Alejandro had had no formal education it was difficult for him to complete his assignments but with a love for God and an unequaled determination he did graduate after a few years of study.  God gave him a deep desire to preach the Word and to win others of his country for Christ.

God led him to a small village not far from Hato Mayor where he had spent his years in studying.  He soon planted a small church in that area and spent his days speaking to individuals about their eternal destiny.  And the people came to know Christ.  A mother, Tatica de la Cruz, accepted Jesús as her Savior and soon brought her oldest child with her.This eight year old boy, Jacinto (Rudy) de la Cruz, also accepted Jesús.

When Rudy was ready for High School his family moved to Hato Mayor.  This was the closest school beyond elementary.  Through all these years Rudy remained faithful and  grew in his knowledge of the Word.  When he heard of a Bible School where he could be better trained in the things of God he was determined to attend in spite of the negative response from his family and church leaders.  They all discouraged the career as a preacher siting examples of how difficult it was to make a living as a minister in his country.  .

With no means of financial backing he left his job and began praying that God would supply his need. Through a friend in Puerto Rico, another brother in Christ he was able to raise  the 13 dollars he needed to attend the first semester of Bible Schoool. He moved to the dorms in the Bible School in the city of La Romana.  Not even his home church would help him.  He put his faith and trust in a God that could supply all of his need according to His riches in glory by Christ Jesús.  Phil 4:19.  And God did supply all his needs throughout the four years of studying God’s Word.

At the age of 19 Rudy was called to pastor the church that Zeral and Dorretta Brown started in the town of Hato Mayor.  A few years later the church in the capital city, Santo Domingo called him to pastor the second church plant begun by the Browns in 1952.  This same Rudy de la Cruz is now pastoring the Iglesia Bautista Quisqueyana Considered to be the largest congregation in the whole Santo Domingo area. This is the very church

Time Ministries is cooperating with, now a thriving church being used to begin other churches.

Thus the ministry of Zeral and Dorretta Brown, begun on May 1st, 1947 70 years ago, continues to grow.  It is estimated that over one hundred and twenty churches are pastored by men who have originated from these two church plants.   The Brown’s planted, others watered and God gave the increase.  Praise His Wonderful Name! 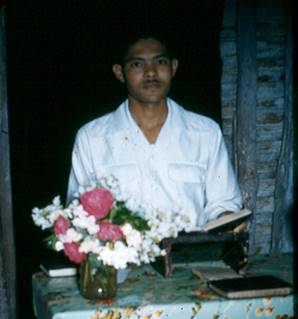